At Virginia Tech, newly arrived international students from China are usually paired with other international students who have been at the school at least one semester to help them acclimate to their new environment. Xin Yang arrived on campus Jan. 8 and, university officials said, met her assigned buddy, Haiyang Zhu.

He spent the next two weeks showing her around campus, officials said, helping her look for a place to live. The two became familiar enough in that short time that Yang listed Zhu as one of two people to contact in case of an emergency.

Friends and former teachers of Zhu, 25, spent yesterday in shock as investigators continued searching his Blacksburg townhouse, laptop computer, cellphone and other personal items to try to piece together why the promising PhD economics student allegedly cut off the head of the 22-year-old woman he had only recently met.

Chinese-language Web pages of Zhu’s began to surface yesterday, indicating that he had money problems. But university officials cautioned that one site in particular, which displays Zhu’s mug shot and talks about him wanting to kill himself or someone else because of losses in the stock market, appears to be a “total fake.”

Still, Will Segar, Zhu’s landlord at Blacksburg’s Sturbridge Square Apartments, said Zhu acted “strange” and was often “hostile and belligerent.” He said Zhu was so concerned about money that he refused to turn the heat on in the three-bedroom townhouse he shared with two roommates. Instead, Segar said, throughout the fall, Zhu gathered sticks and dumped them in the middle of the living room to burn in the fireplace. The apartment had no furniture at the time, Segar said.

“He told my maintenance guy that it cost too much to heat the place, that he’d lost a lot of money in the stock market,” Segar said yesterday.

When pipes began to freeze and a neighbor complained about balky plumbing, Segar installed a thermostat set permanently to 65 degrees, he said. Zhu turned it off at the breaker, he said. Segar said Zhu later accused Sturbridge staff of stealing his shoes. Segar said he last saw Zhu about a week ago when he brought Yang to the rental office so she could rent an apartment. But when Segar asked for Yang’s passport, visa and Virginia Tech ID, Zhu said something to her in Chinese, and she balked.

“It looked like he was definitely in charge,” Segar said. “She was looking to him for advice.”

Zhu’s roommates did not respond to several phone and e-mail messages. Segar said they “disappeared” after Wednesday’s attack.

How a friend and protector could become an alleged executioner remains a mystery as authorities continued to search for a motive in the vicious attack. Virginia Tech and state police referred all calls to the university.

Authorities gave this account: Virginia Tech police, responding to two frantic 911 calls about 7 p.m. Wednesday, found Zhu standing in the Au Bon Pain cafe on campus, with Yang’s severed head in his hands, according to an affidavit. A large, bloody kitchen knife lay nearby, and Zhu’s backpack, on the floor, was filled with other sharp weapons. Seven people witnessed the attack, which came without as much as a raised voice as the two drank coffee.

“All of his friends are very, very shocked,” said Kim Beisecker, director of Virginia Tech’s Cranwell International Center. “They all indicated that they would never have expected this of him and are searching for understanding, for an explanation, as we all are. And we just don’t have one.” 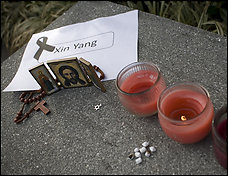 Candles and other items form a makeshift memorial for Xin Yang at the Graduate Life Center at Virginia Tech. (By Justin Cook — Roanoke Times Via Associated Press)

Beisecker said both students participated in activities at the center. “She has just the sweetest, bubbly personality,” Beisecker said. “She really did make an impression with her warmth in just those two weeks. He was polite and helpful.”

Yang’s friends hastily put together a tribute site dedicated to her memory on Facebook yesterday, calling her a “beautiful person” and wishing that she would “Rest in Peace.”

University officials met with leaders of the Chinese student association yesterday. “There has been no backlash at this time,” Beisecker said. “This university embraced our international community after the events of April 16, so we have a history of doing that,” she said, referring to the April 2007 massacre of 32 students and teachers by Seung Hui Cho, a Korean American student who then killed himself.

Zhu remains in the Montgomery County jail, charged with first-degree murder and held without bond. He faces a maximum penalty of life in prison. A preliminary hearing is scheduled for March 5. Zhu’s attorney, Stephanie Cox, has not returned phone calls seeking comment.

Representatives from the Chinese Embassy in Washington met with university officials yesterday and were scheduled to meet with Zhu. The university is working with the State Department to obtain visas for Yang’s family to travel to the United States to retrieve her body but were having difficulty because of closings related to the Chinese New Year, which begins Monday. Yang is from Beijing.

Information emerging out of China yesterday indicates that Zhu, originally from the large seaport Ningbo, near Shanghai, is the son of a university professor and attended Shanghai Ocean University. One of his economics professors, Wei Yang, wrote that she had written him letters of recommendation to study abroad and that her heart “dropped” when she heard the news.

“In my impression, except hearing some people say that he is a little bit proud (this is usually a characteristic of a good student and not a big problem), he is really a good, aspiring and promising young man,” she wrote. “I don’t know what he is thinking now. As his previous teacher, I feel guilty.”

On Zhu’s q.com Web page, a popular social networking site in China, purple flowers and hearts float across an ocean-blue screen. A border of yellow daffodils highlights the site’s motto: “Don’t Worry. Be Happy!” A slideshow of Zhu standing in the snow in Boston and next to New York landmarks, including Wall Street and the World Trade Center, plays to the mournful breakup tune “A Complicated Heart.”

On Jan. 15, he wrote his last entry. It was one sentence.

“A new semester will begin.”