These pictures were taken during the Korean War 1950-53. They are also reproduced in Bevin Alexander’s Korea: The First War We Lost. 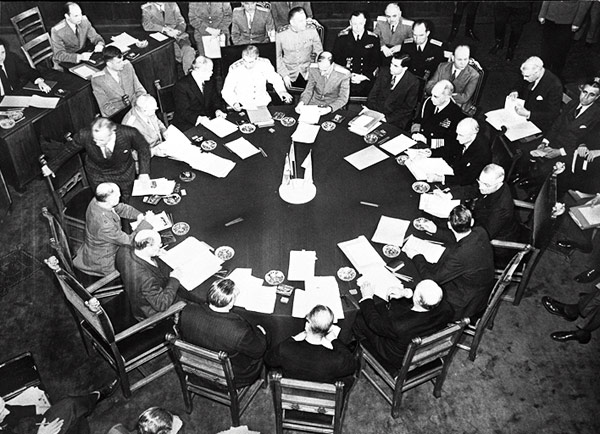 1. The Potsdam Conference of victorious Allies in July, 1945, brought the Soviet Union’s commitment to entering the war against Japan. The result was a Soviet occupation of northern Korea and Korea’s partition along the 38th parallel. (U.S. Signal Corps photo.) 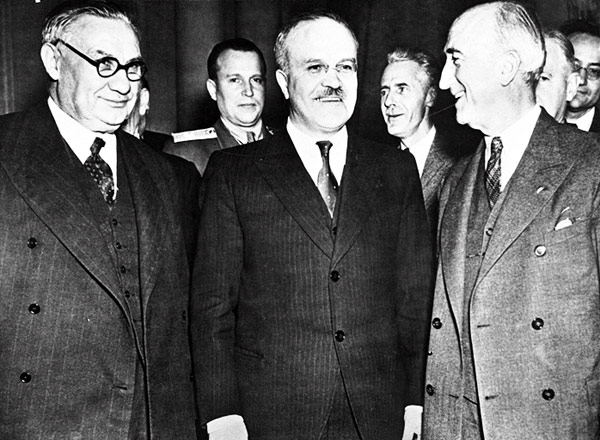 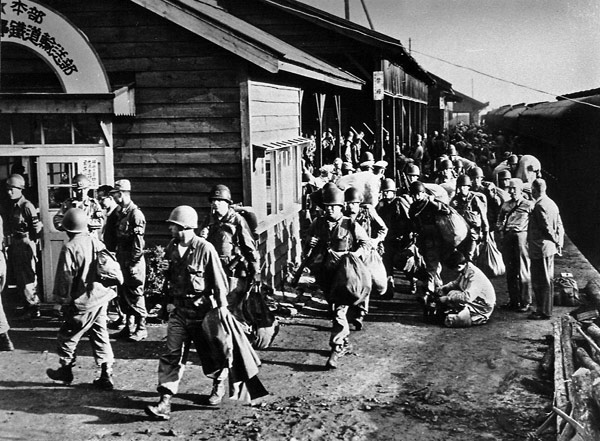 3. Task Force Smith arrives at the Taejon rail station. On July 5, 1950, near Osan, this untried force of about half a battalion, mostly teenagers, stood alone against a North Korean division and a large tank force. (Defense Department photo.) 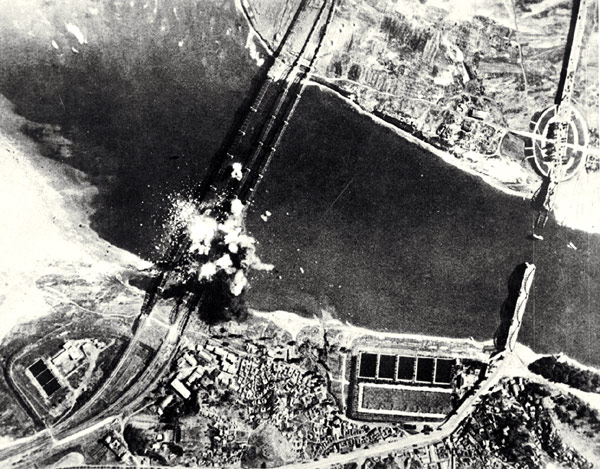 4. U.S. bombs drop on railway bridges at Seoul in early July, 1950. The broken highway bridge at the right was blown without warning by South Korean themselves early on June 28, sending hundreds of fleeing South Korean soldiers and civilians to their deaths. (U.S. Air Force photo.) 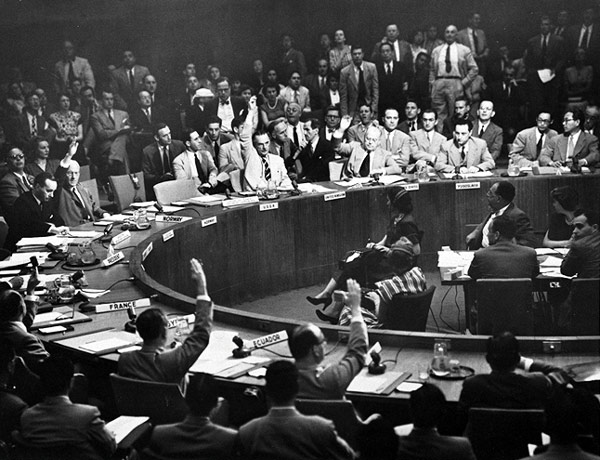 5. The Soviet Union’s seat is conspicuously vacant as the UN Security Council votes on June 27, 1950, to use force to push North Korean troops out of South Korea. ( New York Times photo.) 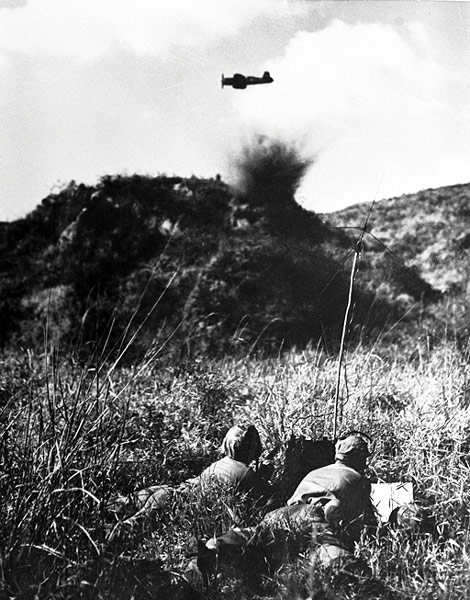 6. A marine air-observer team guides a marine Corsair in for a strike on an enemy-held hill. The “black Corsairs” were highly praised by army and marines alike for their precision strikes on targets and their extremely close support of forward units. (U.S. Marine Corps photo.) 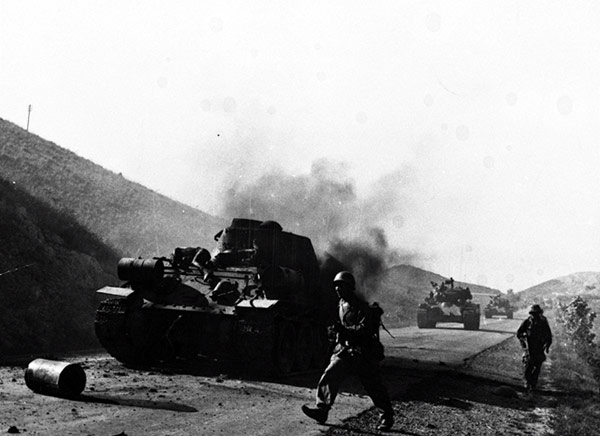 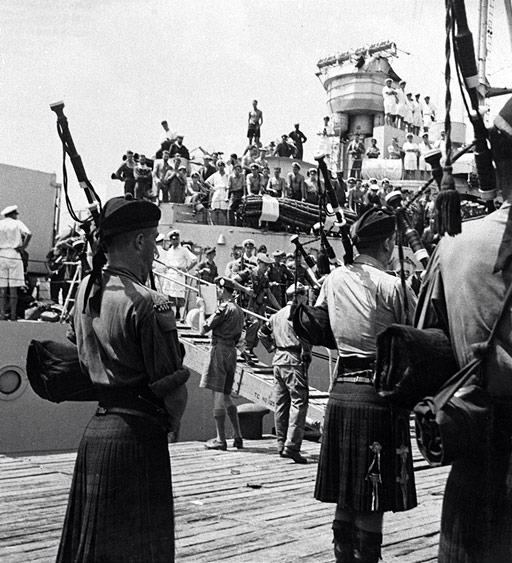 8. Bagpipers of the Argyll and Sutherland Highlanders on August 29, 1950, pipe ashore at Pusan a battalion of their Scottish regiment and a battalion of the English Middlesex Regiment; the first allied ground forces to join the Americans and South Koreans. (U.S. Army photo.) 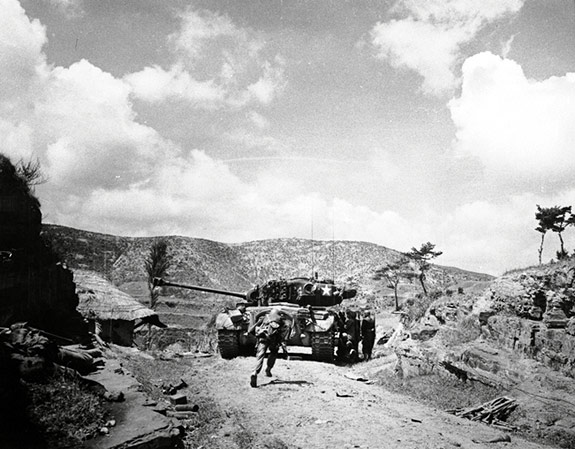 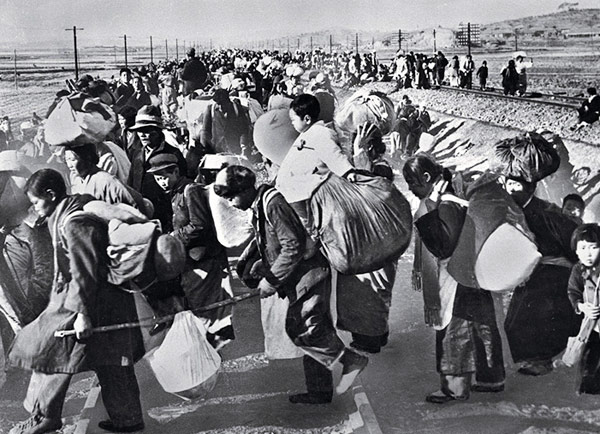 10. Millions of Koreans were uprooted from their homes by bombing, shelling or fear and attempted to flee to safety. Pusan and other cities in the south became giant refugee camps, with people sleeping on the streets. (Defense Department photo.) 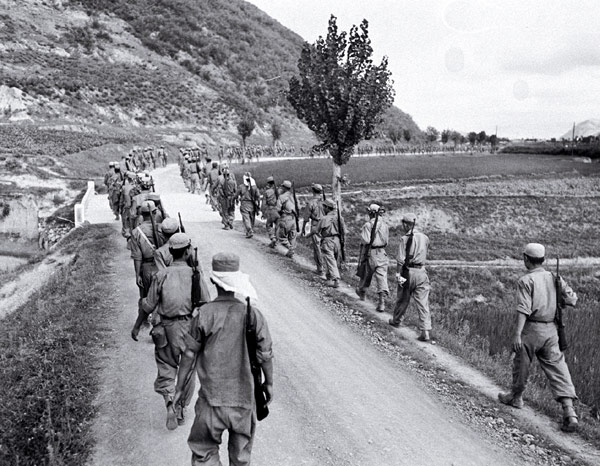 11. Republic of Korea (ROK) soldiers march in typical column formation toward the front in August, 1950, during the Pusan Perimeter battle. This is a standard narrow dirt Korean road raised above rice paddies. (U.S. Army photo.) 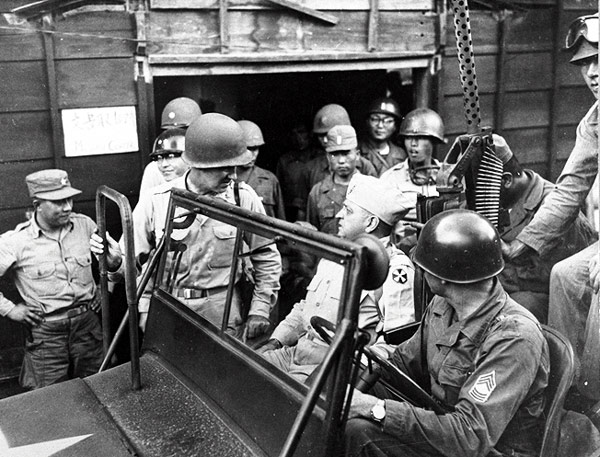 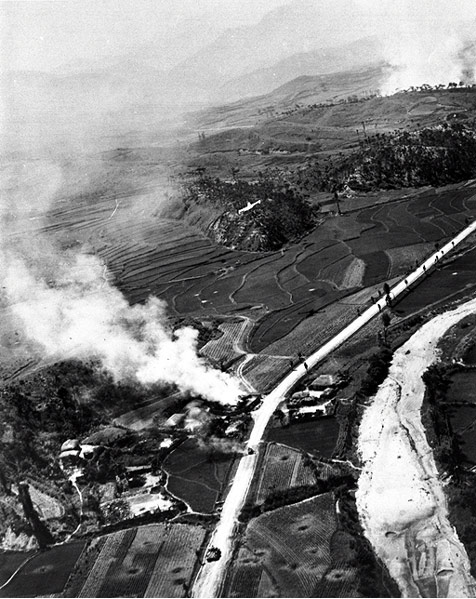 13. During the North Korean offensive in the summer of 1950, an American F-80 jet strafes an enemy T34 tank and jeep in the road and vehicles and troops in the village. (U.S. Air Force photo.) 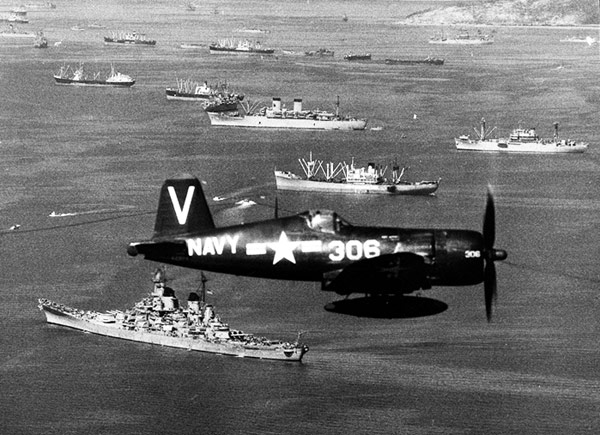 14. A Corsair shepherds part of the armada assembled for the Inchon invasion on September 15, 1950, the world’s last great amphibious landing. (U.S. Navy photo.) 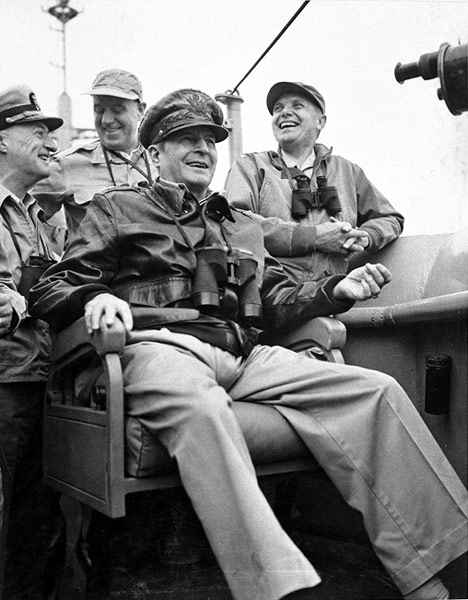 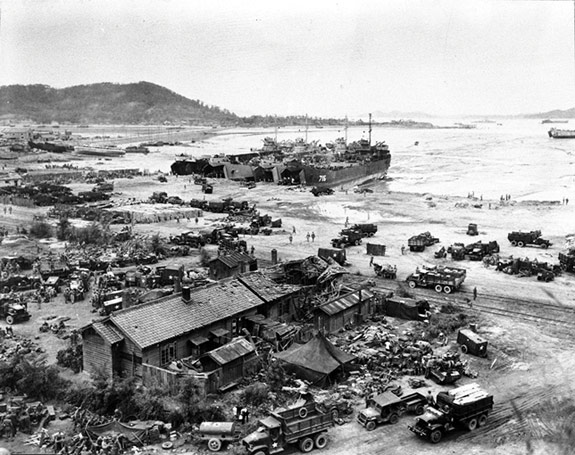 16. Four LSTs unload on the beach at Inchon as marines gather equipment to move rapidly inland on September 15, 1950. Landing ships were stuck in the deep mud flats between one high tide and the next. (U.S. Navy photo.) 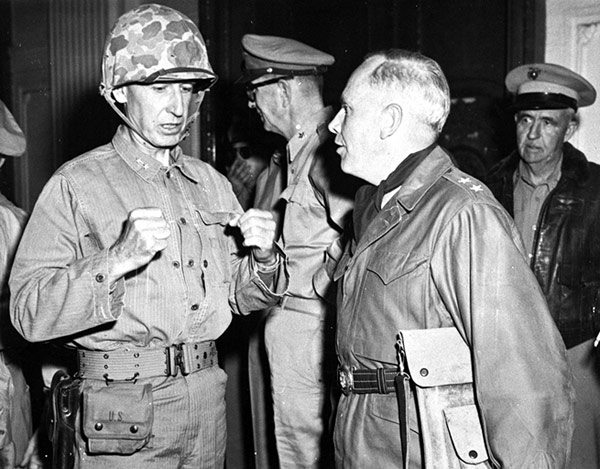 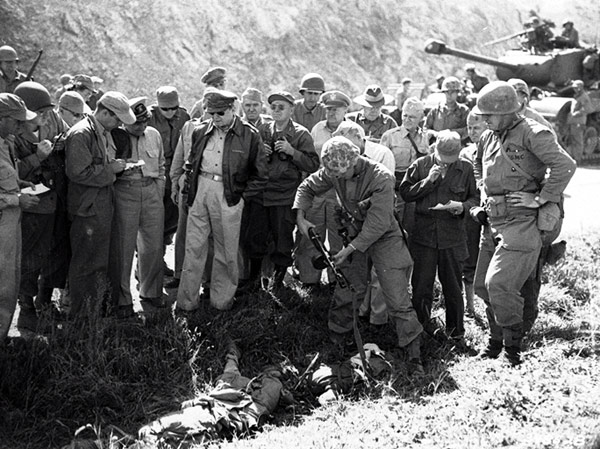 18. General Douglas MacArthur (in leather jacket) and an entourage of press and brass examine bodies of North Korean soldiers at advanced marine positions east of Inchon on September 17, 1950. The marine in camouflage helmet holds a Russian-made submachine gun known to Americans as a burp gun. (U.S. Army photo.) 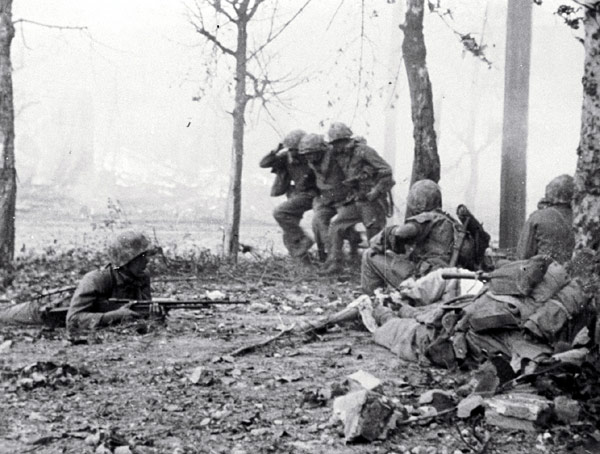 19. Marines carry a wounded comrade while other marines hold positions in the assault on the outskirts of Seoul, September, 1950. (U.S. Marine Corps photo.) 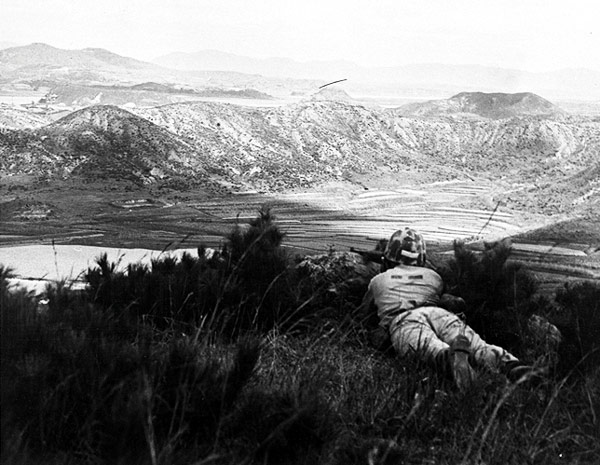 20. A marine infantryman keeps cover as he looks over the Han river valley near Seoul four days after the flanking movement against Inchon. (U.S. Navy photo.)