法新社: In China, war with Vietnam is forgotten history

SHANGHAI (AFP) – China invaded Vietnam 30 years ago this week, but the event will not be officially marked by Beijing, which refuses to acknowledge the war — making life even harder for veterans who are haunted by it.

After a year surrounded by death in Vietnam — gripping a machine gun between diving for cover from howitzer fire — Zhou Feng decided to spend the rest of his days protecting life, not ending it. 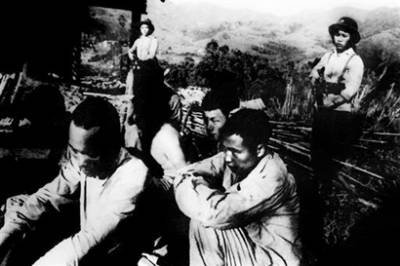 (Chinese soldiers arrested are kept by Vietnamese fighters on the battlefield of Cao Bang, in February 1979. China invaded Vietnam 30 years ago this week, but the event will not be officially marked by Beijing, which refuses to acknowledge the war — making life even harder for veterans who are haunted by it. AFP/File )

The former infantryman said the shame he felt at all the death pushed him to study animal medicine when he returned from the front.

Zhou, 45, now works at a veterinary clinic and at home he shelters 30 stray dogs — by coincidence one for each year since the war.

“In China, the government respects history about as much as they respect these dogs,” Zhou said.

Chinese academics are prohibited from studying the war, in part to avoid damaging relations with former foe Vietnam, said Xiaoming Zhang, an associate professor at the US military’s Air War College in Alabama.

Zhang is writing a book about the conflict that he hopes will be the closest thing to a Chinese account of what happened.

“It was Deng Xiaoping’s war,” Zhang said, adding study of the bloody and inconclusive war may also be banned to prevent it from becoming a “black stain” on the record of the father of China’s economic reform.

China attacked Vietnam, according to non-Chinese accounts, to punish it for invading Cambodia in December 1978 and bringing down genocidal tyrant Pol Pot and his Beijing-backed Khmer Rouge communist regime.

Bad blood with the Soviet Union and Moscow’s support for Hanoi, which Beijing saw as increasingly aggressive after beating the United States and South Vietnam, was also an important factor.

“(Deng) used the war against Vietnam to convince the US that China was a reliable ally for countering Soviet expansion,” Zhang said.

Despite China declaring victory after a month of fighting, a low-intensity conflict smouldered for most of the 1980s.

“It was a bleeding strategy to burden Vietnam while China was able to carry out economic reforms,” Zhang said.

Like Zhou, Xu Ke fought on the frontlines in 1984 as part of that bleeding.

He later spent two years researching a memoir about the war, but found library after library had nothing about the conflict and even army historians turned him away.

“History is just like a wall, made up of different bricks,” Xu said. “But the brick that should contain our history has been deliberately removed. That’s why I wrote the book, I wanted to put it back.”

The 44-year-old finished the book about five years ago, but has since given up finding a publisher to take it.

There are no figures for how many died in the extended conflict, but losses were massive. Non-Chinese scholars estimate for the first month alone 25,000 to 63,000 Chinese were killed and 20,000 to 62,000 Vietnamese died, said historian Peter Worthing, author of “A Military History of Modern China”.

“Clearly the 1979 war served as a warning or wake-up call to the Chinese leadership that the PLA needed improvement,” Worthing said, referring to the People’s Liberation Army.

Despite its advantage in numbers and strength, China fought to a bloody stalemate and had no effect on Vietnam’s foreign policy, he said.

The Chinese government “saw little to boast about and this undoubtedly helps explain the lack of official acknowledgement of this war and those who fought in it,” Worthing said.

Wu, a former propaganda officer who served in Vietnam 25 years ago, said he used to leaf through his teenage son’s history textbooks, searching in vain for a mention of the war.

“Why should this war be hidden from history? It’s so unfair to us,” he said, asking to be identified by his surname only because of the topic’s sensitivity.

The 45-year-old has recurring nightmares about being shelled, but has never spoken to his son about his experiences.

“How could he understand our time and the war?” Wu asked. “He would feel like he was hearing someone else’s story even though it would be coming from me.”