Suspect in bus killing delivered newspapers, worked at McDonald’s
Slain man ‘will always be in their hearts,’ friends say 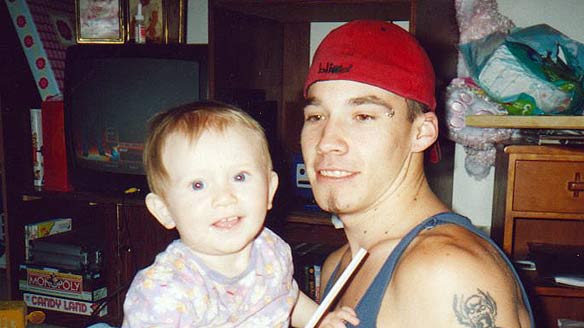 Tim McLean, seen in an undated handout photo, with the daughter of his friend William Caron. (William Caron/Canadian Press)

The man accused of stabbing a young Winnipeg man aboard a Greyhound bus delivered newspapers for several Edmonton publications and had worked at McDonald’s, according to one of his employers.

“I’m still kind of shocked and surprised, to be honest with you. He just never came across as the type of person that could do something like that. He was a nice guy,” Augert said.

“He was there every day, he did a good job, was friendly and really, we had no problems with this individual at all.”

Li worked for the distribution company for about 13 months, but left in April for a short period before returning to the job in June. The Edmonton man also worked at a McDonald’s restaurant, according to Augert.

RCMP announced Friday morning that they had charged Li with second-degree murder. Police said he has no previous criminal record.

Police have not confirmed the identity of the man stabbed to death, and then beheaded according to witnesses, aboard a bus late Wednesday, but court documents name him as Timothy McLean. Friends have also confirmed 22-year-old McLean was the victim, describing him as bubbly and well-loved.

Vince Weiguang Li leaves provincial court in Portage la Prairie, Man., on Friday. He remained silent during his appearance in court. (Rob Swystun/Portage la Prairie Daily Graphic/Canadian Press) Augert said last heard from Li three weeks ago, when the man said he needed a couple of days off to attend a job interview in Winnipeg at the end of July. When Augert called Li’s cellphone on Tuesday to ask why he hadn’t showed up for work, Augert spoke to a woman he said he believed was Li’s wife.

“[She] mentioned that he’d had an emergency, he had to go out of town, and that she wasn’t sure where he went and wasn’t sure if he’d be back the following morning to deliver his newspapers,” Augert told CBC News.

Li appeared for a hearing Friday at the Manitoba provincial court in Portage la Prairie around 10 a.m. CT without a lawyer and refused to speak to anyone.

He shuffled into the courthouse under the weight of heavy leg shackles, with his eyes focused on the floor. His right hand was heavily bandaged and there was visible bruising on his face.

The judge asked him twice whether he had a lawyer, but the accused just stared at the ground. When the judge asked whether Li was exercising his right to remain silent, he nodded his head.

The Crown asked for a psychiatric assessment, but the judge said the accused must see legal aid about getting a lawyer before proceeding further. Li was remanded into custody until his next appearance on Tuesday.

“It’s early and I think the judge just wants to respect his rights to … speak to counsel, and he’s giving him that opportunity,” Crown prosecutor Larry Hodgson said outside court. “I don’t think it will be very long that they’ll allow him to do that.”

Hodgson said if Li doesn’t get his own lawyer, the court could appoint one or the case could proceed anyway.

Second-degree murder, under the Criminal Code, is generally unpremeditated murder. First-degree murder refers to a killing that is planned and deliberate, but also when death is caused by sexual assault, kidnapping, forcible confinement or hijacking an airplane.

In an e-mail to CBC News, friend Jossie Kehler wrote that McLean was loved by everyone, had a bubbly personality and was a ladies’ man.

“He has a lot of friends and they all are very upset he’s gone, and they would like to say they miss him and he will always be in their hearts,” she wrote.

“People say no one’s perfect, but Tim, he was,” she wrote. “He did nothing bad to anyone.”

Tim McLean, shown in a photograph from his MySpace page, was described by friends as a bubbly person loved by everyone. Thousands of Facebook users flocked Friday to a tribute group titled ‘RIP Tim McLean’ set up overnight to send their condolences to family and friends as well as express their shock at the grisly story that made international headlines.

“You are loved and you will be missed dearly!” the site description read.

Friends say McLean had taken a job with the Red River Exhibition and then went to work in Edmonton, but had decided to return home.

On McLean’s MySpace page, under the name JoKAwiLd, he describes himself as five-foot-five, weighing about 125 pounds.

Witnesses initially described the attacker as a hulking man over six feet tall who appeared to weigh more than 200 pounds — but in court on Friday, Li appeared to be about five-foot-eight or -nine, with a stocky build.

McLean’s father, Tim McLean Sr., told CBC News on Thursday night that he was in the process of trying to get confirmation from the police that his son was, in fact, the victim.

He said he was also trying to reach his wife, who is on an Alaskan cruise until next week.

Police officers spent Thursday examining the Greyhound bus where the attack took place. (CBC)The father said his son had sent him a text message around 7:30 p.m. as the bus was leaving Brandon, the last leg of its journey, to ask whether he could come home for the night.

McLean Sr. told his son that of course he could come home. That was the last contact they had.

The RCMP would not confirm reports the victim was beheaded, saying only that a stabbing took place around 8:30 p.m. CT on an eastbound Greyhound bus on the Trans-Canada Highway about 20 kilometres west of Portage la Prairie.

An autopsy was scheduled for Friday at the Winnipeg Health Sciences Centre, and police were waiting for the results before deciding, with input from the family, whether to make the victim’s name public.

“The RCMP are mindful of the range of emotions being experienced by the family of the deceased over the loss of their loved one in such a horrific incident. Our thoughts are with them,” the RCMP said in a statement.

Victim sleeping when attack began
Witnesses said the victim got on the bus in Edmonton, while his attacker came aboard in Brandon and sat away from the victim toward the front of the bus, they said. After a short cigarette break, however, the attacker moved his belongings and chose a seat beside the young man.

Garnet Caton, who was sitting in the seat in front of the victim, said the young man was sleeping with his headphones on when he was attacked.

Caton said he heard a “blood-curdling scream” and turned around to see the attacker holding a large hunting knife and repeatedly stabbing the victim.

“He must have stabbed him 50 times or 60 times,” said Caton, who jumped out of his seat when he realized what was happening and began ushering passengers to the front of the bus.

Caton, the driver and a trucker who had stopped at the scene later boarded the vehicle to see whether the victim was still alive. At that point, Caton said, the suspect was beheading the victim.

The attacker ran at them, Caton said, and they ran out of the bus, holding the door shut as he tried to slash at the trio. When the attacker tried to drive the bus away, the driver disabled the vehicle, Caton said.

RCMP crisis negotiators communicated with the suspect for several hours while he was on the bus. Around 1:30 a.m., he attempted to jump from a bus window and was subdued and arrested, RCMP said.

EDMONTON – An Edmonton man charged with murder in the beheading of a Greyhound bus passenger worked as a newspaper delivery man.

Vince Weiguang Li, 40, worked in the Clareview area delivering the Edmonton Journal, Edmonton Sun and the National Post until he left his contract position in April, said his former employer, Vincent Augert. He returned to delivering papers in the Concordia area in July. Augert said Li called him three weeks ago, saying he had a job interview in Winnipeg. That was the last time Augert and Li spoke to each other.

Li is accused of stabbing and decapitating Tim McLean, 22. McLean died Wednesday night on the bus near Portage La Prairie. McLean had been working at Capital Ex in Edmonton and was taking the bus back home to Winnipeg.

Augert discovered Li was the man accused in the killing today after another employee recognized Li’s name in the news. Augert looked the story up on the Internet and identifed Li through photos posted on news websites, he said.

Li delivered newspapers on Monday. On Tuesday, he “fell off the face of the earth,” Augert said.

Augert called Li’s cellphone and said a woman calling herself Li’s wife called him back.

“She says to me that ‘I don’t know where he is, he had to leave town, it was an emergency,’ ” said Augert.

Augert said Li had worked at a McDonald’s restaurant. His delivery supervisor called him a “nice guy,” Augert said.

Judge Rocky Pollack asked that Li be held in custody pending a court-ordered psychological evaluation. Pollack indicated he wasn’t prepared to make that order until Li had an opportunity to talk to a lawyer.

When asked by Pollack if he wanted a lawyer, Li said nothing, keeping his head down the entire time. However, when the judge asked him if he was exercising his right not to speak, Li reportedly nodded his head.

Li is being held in a Winnipeg detention centre and is under constant video surveillance.

Li’s next court appearance is scheduled for Tuesday.

With files from the Winnipeg Free Press