Members of the Bandidos biker gang took several of their rivals out of a southwestern Ontario barn one at a time and executed them, a police informant told a London, Ont., court Friday. 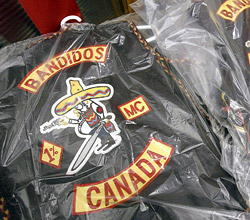 The witness is a former Bandido from the group’s Winnipeg chapter turned police informant who can only be identified as M.H. because he is now in a witness protection program.

Friday was his fourth full day of testimony at the first-degree murder trial of six alleged members and associates of the Bandidos charged with killing eight men linked to the Toronto chapter of the motorcycle gang. The bodies of the men were found on April 8, 2006, stuffed into vehicles on a farmer’s field near Shedden, Ont.

M.H. testified that one of the accused, Wayne Kellestine, sang the “Deutschland, Deutschland ueber alles” part of Das Deutschlandlied, used as the German national anthem during the Nazi era, and danced a jig four or five times on the night of April 7, 2006.

After hearing a brief shootout inside Kellestine’s barn, the witness said, he ran into the barn to find several men lying face down. All but one were alive, he told the court.

At that point, he said, it was unclear what would happen to the rest of the men. The Toronto members gathered before the body of their murdered comrade and said the Lord’s Prayer before his body was wrapped in a rug and taken out of the barn, M.H. testified.

In painstaking detail, M.H. told the court how over the next couple of hours, each of the remaining Toronto bikers was ordered to march out of the barn and shot, many of them at point-blank range.

Kellestine, described by the witness as a disgruntled member of the Toronto chapter who wished to align himself with the Winnipeg chapter, did most of the killing and complained about doing the “wet work,” M.H. said.

Kellestine and the other five accused, alleged members of the Winnipeg chapter, have pleaded not guilty to eight counts of first-degree murder at the Ontario Superior Court trial.

Victim told wife on phone: ‘I love you’

While inside the barn and facing almost certain death, one of the victims, John Muscedere — nicknamed “Boxer” — received a phone call from his wife and was allowed to answer it, the witness said.

M.H. said Muscedere told his wife he would be home in a few hours and said, “I love you.” As he recalled the moment, the witness briefly broke down crying.

He said Muscedere then asked Kellestine to “do” him first, saying he wanted to “go out like a man.”

M.H. said Kellestine initially told Muscedere he was going to let him go, but Muscedere was later ordered outside by Kellestine and another of the accused, Frank Mather.

The witness said he heard “maybe two or three” pops from outside, then the two men returned without Muscedere.

The witness told the court he was later ordered to accompany Kellestine as he took another victim, George Jessome, outside from the barn to a parked tow truck.

M.H. described how Kellestine ordered Jessome to get into the truck, then shot him twice, including once in the head, as he was half-in the vehicle. Kellestine then told M.H. to move Jessome’s foot into the truck and shut the door, he said.

The witness said when they returned to the barn, Kellestine ordered two other victims, Michael Trotta and Jamie Flanz, to mop up the blood from the first victim shot, Luis Raposo.

‘I’m going to save you for last’

Earlier in the day, M.H. testified that at one point Kellestine hit Flanz, made a derogatory comment about him being Jewish and said “I’m going to save you for last.”

With several cars loaded with bodies, he said Kellestine ordered them to drive to an area well away from the farm.

But they didn’t make it far. He testified that one of the accused was worried about running out of gas, so the bodies were abandoned only about 15 kilometres away from Kellestine’s farm, near the community of Shedden.

The Winnipeg bikers then returned to the farm, he said, where they burned their own clothing, as well as the victims’ wallets and cellphones. Then they started to drive back to Winnipeg, M.H. told the court.

The other men charged along with Kellestine, 59, and Mather, 35, are:

The witness is expected to continue his testimony on Monday.