The more things change, the more they don’t stay the same.

As “A Visual Legacy,” an exhibition of historical photographs that opens today at the Toronto Archives, makes abundantly clear, this is a city that has reinvented itself many times.

Starting in the 1850s, Toronto was a small but earnest community with big ambitions and a strong sense of its own worth. Indeed, the earliest photographs in the show were commissioned by town officials as part of their effort to have Toronto named “Capital for the Province of Canada.” 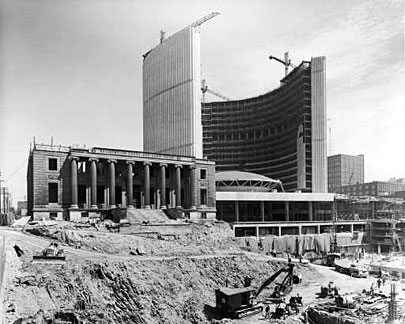 CITY OF TORONTO ARCHIVES/Modern curves of New City Hall under construction dwarf the neo-classical shell of the old Registry of Deeds and Land Titles Building in this photo taken June 22, 1964.

The submission, which was sent off to the Colonial Office in London, wasn’t successful; the honour went instead to Ottawa. But 150 years later, these pictures taken in 1856 and ’57 by Armstrong, Beere and Hime, “Land Agents, Engineers and Photographists,” provide a wonderful record of a compact Victorian city whose urbanity still offers lessons for the 21st century. It’s true the streets are mud and the sidewalks made of wood, but there’s an impressive sense of coherence; the buildings clearly intended to be part of a larger whole.

Interesting, too, that there was a time long before waterfront revitalization was a ripple in the city’s eyes, when people lived on the edge of Lake Ontario. Not in cottages or condos, as they do now, but in brick houses that were integrated into the downtown core, such as it was.

Today, of course, the remnants of this previous incarnation can only be found here and there, in places such as King and Front Sts. east of Yonge. Mostly, it has been obliterated in our rush to the future.

As the exhibition also demonstrates, however, it’s just as well so much of old Toronto has disappeared. There may be areas of the present-day city that one wouldn’t choose to inhabit, or visit, but nothing we have now compares to neighbourhoods like The Ward, a genuinely Dickensian slum that stood on the site of New City Hall.

In the first decade of the last century when Toronto’s medical officer of health, Dr. Charles Hastings, sent city photographer, Arthur Goss, to document the living conditions among the poor, what he saw was not pretty. A series of painfully revealing shots shows families living in tiny shacks, filthy and falling down. In one memorable picture, Goss used the (then new) Old City Hall as a backdrop to a portrait of The Ward. The juxtaposition says everything one needs to know about societies’ willingness to tolerate extremes of poverty and wealth. In that regard, little has changed.

More optimistically, there are photographs of the young Toronto busy improving itself, paving roads, putting up bridges, laying cables … . Much of this work was undertaken under the leadership of R.C. Harris, the commissioner of public works for 33 years starting in 1912. This was, perhaps, Toronto’s Golden Age of city-building, a time when the Price Edward Viaduct and the R.C. Harris Filtration Plant, the so-called Palace of Purification, were built.

Archivist and exhibition curator Steve Mackinnon has included numerous photos of major civic projects under construction. Though citizens worried about cost, there was something grand, even heroic, about these early decades of the 20th century, the era when Toronto shook off the dust of its provincialism and decided to become a real city. Much of that infrastructure is now threatened by decades of neglect and delayed maintenance. Harris must be rolling in his grave.

In fact, that commitment to the future continues right through until the 1960s with a remarkable picture of New City Hall going up. The beautiful neo-classical shell of the old Registry of Deeds and Land Titles Building still stands even as Viljo Revell’s masterpiece goes up behind it. The contrast is startling, a monument of the 1900s about to give way to a landmark of the modern age.

The exhibition is as much about the archives as Toronto. As Mackinnon points out, “The idea was to highlight the collection and document the city’s use of photography.”

There has been discussion recently about the lack of a museum of Toronto, and certainly such a thing is much needed in a city like this, which places so little value on its own history. In the absence of such an institution, we have the archives, the repository of much of our past, photographic and otherwise. Through exhibitions like this, its vast holdings can be seen and appreciated by Torontonians.

January 27, 2007
Though Toronto as a city has been interested in photography since the 1850s, it didn’t hire an official photographer until 1911. That’s when Arthur Goss appeared on the scene. He remained on staff nearly 30 years and during that time created one of the most compelling records of a city in transition. Indeed, his pictures of the poor are credited with having helped bring Toronto into the modern era of public health.

“After him the city hired Howard Macdonald,” – who had worked under Goss – “but the position was downgraded and the salary cut by 20 per cent.

“Then in the 1950s, it was gradually eliminated altogether and wasn’t re-established until 1982 as part of the Department of the City Clerk.”

Since then, the city photographer’s responsibility has been to provide pictures for various civic publications such as brochures, reports, press releases and the like. These days, the job includes shooting video as well as taking photographs.