可做头环、用来绑头发或马尾，可做小帽，甚至防尘口罩。
This uniquely printed bandana is perfect for summer weather! It is UV protected, moisture absorbing, lightweight, stretchable and made of 100% polyester microfibre. It can also be used as a headband, scarf, pony tail holder, beanie and tube top. 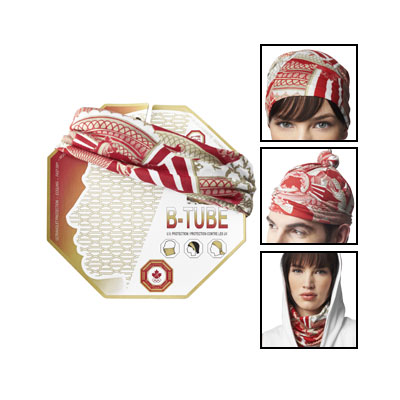 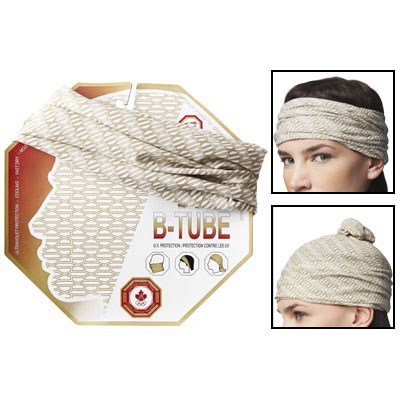 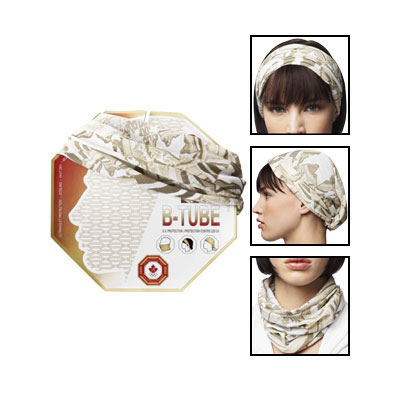 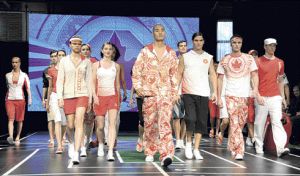 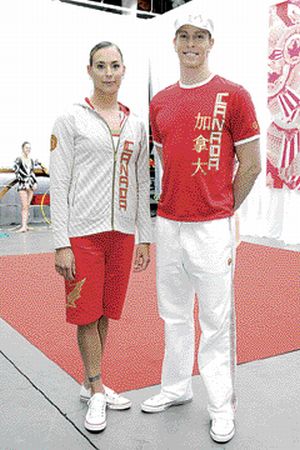 Canada’s Olympic athletes will be sporting a touch of green in their traditionally red and white uniforms at the Beijing Games — not only as a colour but also in the eco-friendly fabrics used for the clothing line. 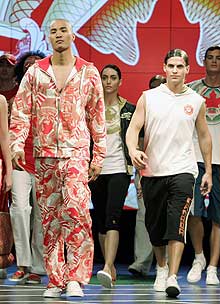 Models and Olympic athletes model the clothes that will be worn by Canada’s Olympic athletes in the athletes’ village at the Beijing Games during a fashion show in Toronto Wednesday. (J.P. Moczulski/Canadian Press)

The Hudson’s Bay Company unveiled the athletes’ clothing line for the Beijing 2008 Olympic Games in Toronto on Wednesday.

The outfits use such materials as bamboo, organic cotton and cacona, which is derived from coconut.

Designer Tu Ly said the move to environmentally sustainable materials was made easy by a larger worldwide trend that increased the availability of such products.

“It was a real movement in every part of our lives, so it was hard not to be conscious of it,” Ly said in an interview Wednesday with Canadian Press prior to the unveiling of the clothing line.

Designers also adapted the clothing to the high temperatures expected in Beijing after consulting with athletes who took part in the 2004 Summer Games in Athens. Those athletes said they were unprepared for the heat in Greece.

With that in mind, the clothing for the Beijing Games was made using fabrics that provide UV protection, four-way stretch, odour resistance and wicking and cooling properties to help keep athletes comfortable.

While some of the designs use only the traditional red and white colours of the Canadian Olympic team, others feature a busy blend of symbols and patterns in a mix of muted tones.

Colour and design inspiration came in part from the five aspects of Chinese astrology — earth, wood, fire, water and metal — the designers said in a press release. 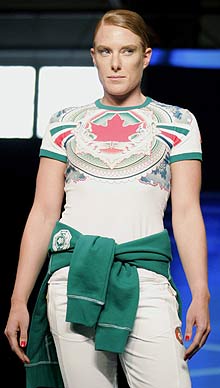 Also used are such Chinese symbols as the lucky number 8, represented both as a numeral and an octagon.Olympic rower Krista Gulien models one of the shirts featuring the colours of the five elements of Chinese astrology. (J.P. Moczulski/Canadian Press)

The line also includes a multi-functional piece called the B-tube, which designers say could be sported as a bandanna, hair band or even a mask to filter smog while in China, where air pollution is a concern for athletes.

“We felt that this time around, we wanted the athletes to make it their own,” Ly said of the piece.

Sports fans and style-watchers eager to see the other line of Olympic clothing, which will be donned by athletes during the Aug. 8 opening ceremony and on the medal podium will have to wait until the Games for the unveiling.

Many pieces will be available for sale as replica wear at the Bay, Zellers, on the Hudson’s Bay Company website, as well as during the Olympics at Canada House and the BC Pavilion in Beijing.

Each Olympic team member will receive 25 items, including jackets, pants, shorts, hoodies, T-shirts, shoes and luggage, as well as “team only” products such as the opening ceremony outfit and medal podium jacket.

With files from the Canadian Press
http://www.cbc.ca/canada/story/2008/04/30/canada-athletes-wear.html

Designers have incorporated an element in the Canadian Olympic team’s gear that could help athletes stave off Beijing’s pollution.

A sun-blocking polyester tube dubbed the B-Tube can be worn as a head cover, hair band or mask to filter out the particulate matter in the air. It’s a novel combination of style with practical function.

Other teams have considered using conventional masks to limit the exposure to Beijing’s notoriously bad air. U.S. Olympic Committee physiologist Randy Wilber is advising that country’s stars to arrive as late as possible in Beijing and to wear masks from the time they arrive. British Olympians have considered conventional masks as well, but have lately been discouraged by team bosses who worry they might hinder late training.

The $15 B-tube tube was unveiled by supplier Hudson Bay Company as part of Canada’s look 100 days before the Beijing Games. The garments are lightweight, in deference to expected 40-degree heat in the Chinese capital, busy red and white prints with splashes of teal and green. The motifs are combined Canadian and Chinese themes and there liberal use of the Chinese lucky number of eight as a numeral and as octagonal patterns. 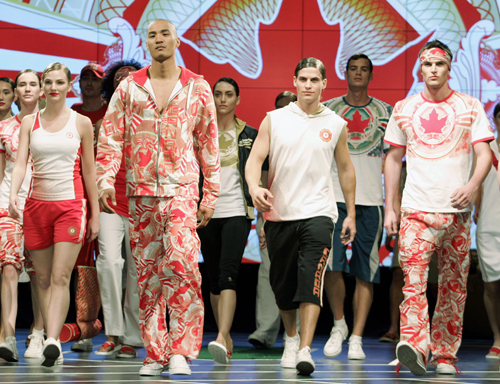 Colour and design inspiration have been taken from the five elements of Chinese astrology: earth, wood, fire, water and metal. The clothing uses many natural materials like bamboo and organic cotton. Most of the pieces will be available for sale as replica wear both at the Bay and Zellers stores and online at www.hbc.com.

Olympic team members will each receive 25 items as part of the team package, including leisure wear, jackets, pants and shorts, hoodies and T-shirts. Parade wear for the opening ceremonies won’t be revealed until the Aug. 8 start of the Games, however.

It’s the same story for the United States team, which unwrapped its Ralph Lauren-designed gear this week but will keep the ceremonies garb secret until the official start. Lauren replaced Canadian designer Roots for the American athlete gear this time.

David Lauren, the designer’s son, said the USOC was looking for Chariots of Fire, but the designer chose a look that would make athletes American ambassadors. The inspiration for the new styles came from the days of Jesse Owens, in an era before track suits became essentially the uniform for Olympians around the world, David Lauren told The Associated Press.

The looks range from classic polo shirts with graphic Chinese lettering that read “Beijing,” to tennis and cricket sweaters paired with ties. There are white walking shorts and sweater vests tipped with red and blue that the male athletes will wear around the Olympic Village — or a white polo shirt with both a red and blue stripe on the collar and armbands that is part of the closing ceremony outfit for the female Olympians, Lauren said.

“We really brought fashion to the Olympics,” says a chuffed Suzanne Timmins, fashion director of The Bay.

Canada consistently elevates the cool factor in its Olympic uniforms. And other countries are taking up the torch, she says. “It’s just not good enough any more to sew your country’s flag on an Adidas windbreaker,” says Timmins. The Russians really got their game on in Torino, she says, referring specifically to, “those over-the-top fur hats.”

And even when international designers like Giorgio Armani for Italy, Yohji Yamamoto for the U.K. and Ralph Lauren for the U.S. are recruited, they’ve never quite hit their mark, explains Timmins.

For consumers, the Bay design team has played with bold patterns and graphics in an ebullient mix of Canadian and Chinese icons and colours. Much of it is produced in super-light, silky fabrics, and eco-friendly materials, all trends consistent with looks seen on runways, she insists.

“We all see Kanye West in this outfit,” jokes Timmins, pointing to an exuberantly printed cotton fleece hoodie and matching nylon track pants in red, white and gold.

The progress of the entire collection was scrutinized at various intervals by Hbc and Canadian Olympic Committee executives. As well, focus groups were conducted with athletes across the country to make sure their apparel met their needs.

Most of the collection, which has taken a year to complete, was made in China. In a news release Hbc executives insist all factories producing merchandise “were audited and, where needed, improvements were made in the factories in order to comply with Hbc’s longstanding Code of Vendor Conduct.”

The collection is divided into two categories – the outfits designed exclusively for the athletes for the opening ceremonies and podium presentations, and a commercial “replica” collection based somewhat on the athletes’ wear. It goes on sale tomorrow at Bay and Zellers stores and online at hbc.com.

The replica collection, less restricted by regulations, will also be sold at Canada House and the B.C. Pavilion in Beijing’s Olympic Village. Prices range from $20 for a white Ming cadet cap to $40 for a polo and $140 for a rolling upright suitcase.

But opening ceremony outfits and podium pieces, produced only in the Canadian flag’s red and white, are reserved for the athletes, who insisted they didn’t want to see those pieces on consumers walking down Yonge St. Hbc makes a point of not showing opening ceremony and podium outfits before the Games begin.

Timmins admits it was challenging to work within the confines of a two-colour palette. “The Americans get red, white and blue. Give us that extra colour,” she says, in a mock plea for creative freedom. Each athlete receives 25 pieces from the collection.

They started with an examination of both countries’ dramatic landscapes and ultimately narrowed the palette to colours that reflect the five Chinese elements of astrology – fire, wood, water, earth and metal. Canadian and Chinese symbols are mixed in a chinoiserie motif in “Great Lakes” blue and “jade” green, for example. “And not just any blue – a beautiful tealy-greeny blue,” qualifies Timmins. A tattoo design features a prominent red maple leaf surrounded by brilliant green and blue swirls and waves of colour.

As well, the number “8” is a recurring theme throughout the collection – in a fine repeated lattice print or stacked graphically as a tape down the outside seam of track pants. (The Olympics officially start on the eighth day of the eighth month at the eighth hour.) “Eight is a very lucky number for the Chinese,” says Timmins.

But this is not a purely fashionable pursuit, she explains. In 2005, Hbc signed a $100 million deal for the rights to produce the official Olympic gear until 2012, including the daunting task of creating the complete line for the 2010 Winter Olympics hosted by Vancouver.

They learned lessons from the past. For example, “the athletes melted in Athens,” Timmins recalls, so everything designed for the Beijing Games is super lightweight. “It could be 45 degrees in Beijing in August.”

Designer Ly says various fabrics have “built-in cooling factors, moisture-wicking technology and are UV resistant.” As well, for environmentalists, some fabrics are created from bamboo and organic cotton.

They’ve also learned not to illustrate the collections on “stick figure” models, recognizing that gymnasts and speed skaters have beautiful shapes “with muscles.”

But in the end, according to Timmins, the real indication that you’ve succeeded is when you see the athletes walking around the Olympic Village wearing your clothes, “not because they have to, but because they want to.”

And what will be the big Olympic Village trading item?

It could be one of the colourful tattoo T-shirts, but as a sheer novelty factor, the $15 multifunctional B-Tube in a print mixing Canadian and Chinese motifs could be the hot ticket.

The simple tube of polyester material promises to block more than 95 per cent of UV radiation and can be worn as a face mask to filter smog, as a hairband, and as several different styles of head covering.

“Perhaps some of the female gymnasts can wear it as a bandeau top,” says Timmins. 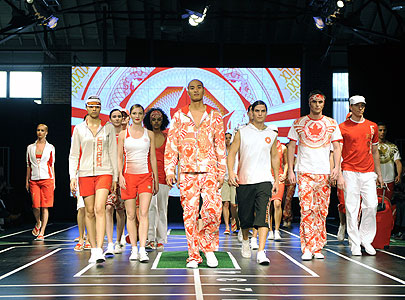 LUCAS OLENIUK/TORONTO STAR
Models and athletes walk down the runway on April 30, 2008 wearing a selection of the Bay’s Olympic apparel line that Canadian athletes will be provided with for the Beijing games.