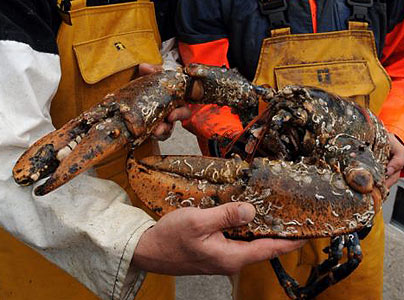 How old is a lobster? Check his eyestalk

The age of a lobster, or a crab or shrimp, can be determined by counting growth rings, as is done with trees. But scientists aren’t sure yet how old a lobster can live to be.

Scientists have now figured out that growth rings can be found in the eyestalk – a stalk with an eyeball on the end. Growth rings are also found in gastric mills – the teeth-like structures in their stomachs used to grind up food. (AP Photo/Robert F. Bukaty)

For the first time, scientists have figured out how to determine the age of a lobster — by counting its rings, like a tree.

Nobody knows how old lobsters can live to be; some people estimate they live to more than 100.

But knowing — rather than simply guessing — their age and that of other shellfish could help scientists better understand the population and assist regulators of the lucrative industry, said Raouf Kilada, a research associate at the University of New Brunswick who was the lead author of a scientific paper documenting the process.

Before now, scientists deduced a lobster’s age judging by size and other variables. But it’s now known that lobsters and other crustaceans, such as crabs and shrimp, grow one ring per year in hidden-away internal spots, Kilada said.

RECOMMENDED: Are you scientifically literate? Take the quiz

“Having the age information for any commercial species will definitely improve the stock assessment and ensure sustainability,” he said after presenting his findings Thursday at a scientific conference in Portland.

But crustaceans posed a problem because of the apparent absence of any permanent growth structures. It was thought that when lobsters and other crustaceans molt, they shed all calcified body parts that might record annual growth bands.

For their research, Kilada and five other Canadian researchers took a closer look at lobsters, snow crabs, northern shrimp and sculptured shrimp.

They found that growth rings, in fact, could be found in the eyestalk — a stalk connected to the body with an eyeball on the end — of lobsters, crabs and shrimp. In lobsters and crabs, the rings were also found in the so-called “gastric mills,” parts of the stomach with three teeth-like structures used to grind up food.

To find the growth bands, the scientists dissected the eyestalks and the gastric mills, cut out sections and viewed them under microscopes.

Lobsters don’t lose reproductive capabilities or organ functions or exhibit signs of aging as they get older, but nobody knows for sure how old they can live to be.

“We’ve thought lobsters could live to 100 years old, and this new aging technique will be a way to document that,” said Bob Bayer, executive director of the University of Maine’s Lobster Institute.

The paper was published in this month’s Canadian Journal of Fisheries and Aquatic Sciences, a well-regarded peer-reviewed scientific journal based in Ottawa, Ontario, that has been published since 1901. Kilada’s was one of more than 50 scientific presentations at the conference, attended by more than 100 lobster scientists from the U.S., Canada and Europe.

Bayer agreed that this is the first time scientists have a direct method to place an age on crustaceans.

“Right now we’re just guessing at their age,” he said.

Kilada said he saw lobster specimens that were 16 or 17 years old during his research. He estimates that there are lobsters 60 or 70 years old living in the wild.

Susan Waddy, a lobster researcher with Canada’s Department of Fisheries and Oceans, said she has kept lobsters in her laboratory that are more than 30 years old. She suspects they live to be 40 or 50.

“We know they don’t live forever,” she said.

That Lobster is How Old?!

How big was the largest lobster you have ever seen? Did you wonder how old it might be? I have seen a 27pound lobster, and he was estimated to be about 50 years old! Up until now, scientists could only estimate a lobster’s age by its size, which has not been a very precise method.

On Thursday November 29th at a scientific conference in Portland, Maine, Raouf Kilada, a research associate from the University of New Brunswick, announced that he and five other scientists discovered a way to accurately age a lobster!! It may sound very strange, but the proof is in the lobster’s eyes!!

Lobsters have eyestalks. An eyestalk is like a rod that is connected to the lobster’s body at one end and has an eyeball at the other end. The scientists discovered that there are growth rings within the eyestalks that can be counted to determine the lobster’s age! This process is a little like aging a tree by counting the rings in the trunk!

This is a very important discovery that will allow scientists to better assess lobster populations, and determine exactly how old a lobster can live to be. Some scientists believe they can live for well over 100 years! Stay tuned… we may have the answer soon…

How old do lobsters get?

Lobsters, when not caught, can live for a long time. Living to the age of 100 is not uncommon. Of course, because lobsters are prized for their meat, many don’t make it past just a couple of years old. Lobsters must be a certain length — not age — to be deemed legal for catching. 15 yrs. old

It takes approximately seven years (depending on the water temperature) for a lobster to grow to legal harvesting size (1-1 1/4 lb.). After that, a lobster will grow about 1 pound for every 3 years.
It is interesting to note that lobsters show no real signs of aging, other than growing. They actually can reproduce and stay fertile continuously!

The secret lies in their telomeres.

telomeres are found at the end of chromosomes for all living creatures. As we age and cells divide, the telomeres shorten and eventually disappear- leading to aging and death.Lobsters telomeres take a much longer time to shorten , if at all- allowing them to ‘maintain their youth’ (A lot of anti-aging experimants are done with lobsters)