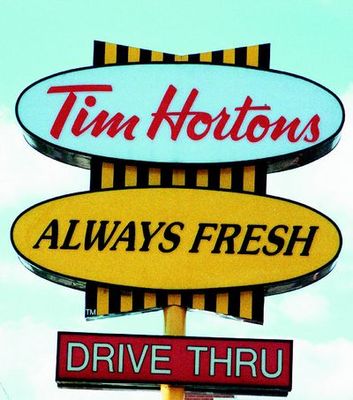 By David Friend, The Canadian Press

TORONTO – Considering that many Canadians practically bleed Tim Hortons coffee on any given workday, it may come as a surprise to some that the much-beloved chain is once again returning its home base to Canada.

Didn’t know Tims has actually been registered in the United States for years? That’s easy to forgive, considering just how deeply ingrained the brand has become in the Canadian consciousness.

But it is true that the house built on the doughnut and double-double was for nearly 15 years – a result of its purchase by U.S. burger chain Wendy’s – registered far away in Delaware.

Parent company Tim Hortons Inc. (TSX: THI.TO) announced Monday it has filed documents in the United States that would shift its corporate ownership back north of the border. Its current Canadian headquarters is in Oakville, Ont., west of Toronto.

The company says the move – which it had said it was considering earlier this year – will save on taxes and make international expansion easier.

It certainly won’t hurt its image with Canadians either, because the famous chain is probably the country’s most-treasured brand.

Although it will have virtually no impact at all on its storefront operations, the announcement was well received by Tims fans, quickly garnering delighted comment on social networking Internet sites.

“I give this message 9.8 on the Timbit scale of joy,” wrote “JoeyRudichuk,” a user of the popular Twitter micro-blogging site.

However, the enthusiasm wasn’t quite as strong from all fronts.

“The fact that it is or isn’t a Canadian company really has little or no bearing on me,” said Carl Butt, who was drinking a Tim Hortons coffee in downtown St. John’s, N.L.

“Whether or not I support it comes down to: ‘Where’s the quickest cup of coffee?”‘

That attitude was much the same in Vancouver, where customers at a downtown Tim Horton’s said the company’s home base is of little concern.

“I just wanted something cold,” Jennifer Peterson said, an iced coffee warming in her hand.

Peterson said she was surprised to learn the company’s headquarters weren’t already in Canada, but that the move ultimately makes no difference to her.

Brad, who didn’t give his last name, said the shift doesn’t give him a heightened sense of national pride.

“I was going to go to McDonald’s (for coffee) but the line was just too long,” he said.

Tim Hortons, founded in the mid-’60s by Cochrane, Ont.-born hockey legend Tim Horton, became part of Wendy’s in 1995, forging a partnership led by Wendy’s founder Dave Thomas that saw the restaurants sit side-by-side at many locations.

After Thomas’ died in 2002, the two companies started to drift apart, with the doughnut chain choosing to focus on sandwiches and other breakfast and lunch options. The concept clashed with offerings from the Wendy’s brand.

In 2006, the company was spun off into its own American entity, though its corporate headquarters remained in Oakville and most of its stores are in Canada.

Since then, the chain has struggled to boost sales in the United States despite thriving in Canada.

The migration back to Canada will allow Tim Hortons to reap benefits of the lower federal tax structure that was announced last year by Finance Minister Jim Flaherty.

The lower taxation has come under fire by some critics who say that while they’re beneficial to the bottom lines of Canadian businesses, they also take a chunk from Ottawa’s coffers at a time when the country is facing a $50-billion deficit.

Tim Hortons spokesman David Morelli said that while the company expected some interest, executives were “flattered by the reaction to what we thought was a pretty bland corporate announcement.”

Executives for the company weren’t available for interviews, and the company opted to keep things relatively low key, though president and CEO Don Schroeder emailed The Canadian Press a statement on the move.

“Tim Hortons is proud of its Canadian heritage and the national pride it evokes,” he wrote.

“Our store owners have worked hard to develop a special connection with customers across Canada. And we’re just as proud of our growing presence in the United States.”

Earlier this year, Schroeder told analysts in a conference call that he believed the move was beneficial for the company and its investors.

“With these assessments substantially complete management and the board concluded that a reorganization is in the best interests of the company and our shareholders over the long term, Schroeder said.”

He added that the change in “no way alters our commitment to growing our business in the U.S. or in any way affects our underlying business.”

In the company’s announcement, it acknowledged that it would face certain charges related to the changes, and costs of the transaction could cause it to miss its operating income targets.

Tim Horton’s has been a publicly traded company, listed on the Toronto and New York stock exchanges, since Wendy’s first began to spin off its shares in 2006.

Shareholders will hold the same amount of stock as before, and the company will continue to operate under the Tim Hortons name with stock listings on the TSX and the New York Stock Exchange.