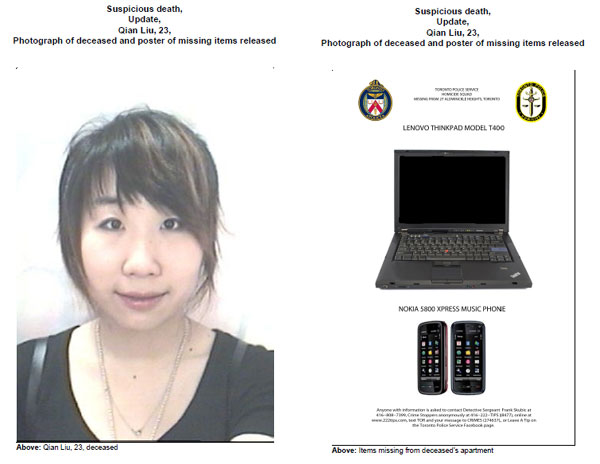 The boyfriend of the York University student found dead in her apartment last week has said he believes the man he witnessed enter Qian Liu’s room is the same man whose advances she had been repeatedly turning down.

The man, who spoke for the first time about the incident with CTV’s Ben O’Hara-Byrne at the park in China where he first met Liu, said his webcam conversation with Liu was interrupted when she heard a knock at the door at about 1 a.m..

“She opened the door and it looked like they knew each other pretty well,” said the man who requested anonymity. “They said hello and he borrowed her cell phone.”

The victim’s boyfriend said although it appeared that the man wanted to hug Liu, he saw her refuse.

“He wanted to hug (her) but she said no and fought back,” he said. “I was so helpless, I could not calm down until in the end the guy closed the computer.”

Although police have contacted the Liu’s boyfriend about gaining access to his computer, he said they still haven’t been able to investigate.

“Canadian police want my computer,” he says. “An expert could help to find clues but I still have it for now.”

Det.-Sgt. Frank Skubic told reporters Tuesday afternoon that the “online witness” in China reported watching the live-streaming online feed for several minutes after Liu answered her apartment door before the feed was eventually cut off.

A photograph of Liu with a man suggested as a rejected suitor has circulated on Internet forums.

Skubic said officers have spoken with the man and say he is merely a “person of interest” in the investigation.

Skubic also said police are searching for Liu’s missing IBM ThinkPad T400 laptop and an external webcam, which she used to speak with family and friends in Beijing shortly before her death.

Being a live-streaming feed, Skubic said it did not appear that a copy of the conversation had been recorded, but police were continuing to investigate the possibility.

Skubic added a Nokia 5800 Xpress Music Phone was also reported as missing from the scene. Another cellphone seized by police has been determined to have been unused and deactivated.

“I am appealing to the community to be on alert, for anyone who sees a discarded laptop, a webcam and also a smartphone to notify us immediately,” Skubic said.

In an update on Tuesday, Skubic said forensic testing on Liu’s body has “not assisted in determining a medical cause of death.” Toxicology reports are still pending.

From Beijing, Liu’s father told Ming Pao Daily News his daughter was talking to her mother over the webcam the night she died. Moments later she was on the webcam with her boyfriend, also in Beijing, when he saw someone enter her room and ask for her cellphone. A struggle ensued and the webcam was shut off.

Liu’s father, who has called for justice in the death of his daughter, is flying to Toronto. He is expected to arrive Wednesday.

“While Ms. Liu’s death has not yet been classified as a homicide, we are approaching this investigation carefully, methodically and with the due diligence required in such a tragic case,” Skubic told reporters on Tuesday.

“We must keep an open mind to all the possibilities.”