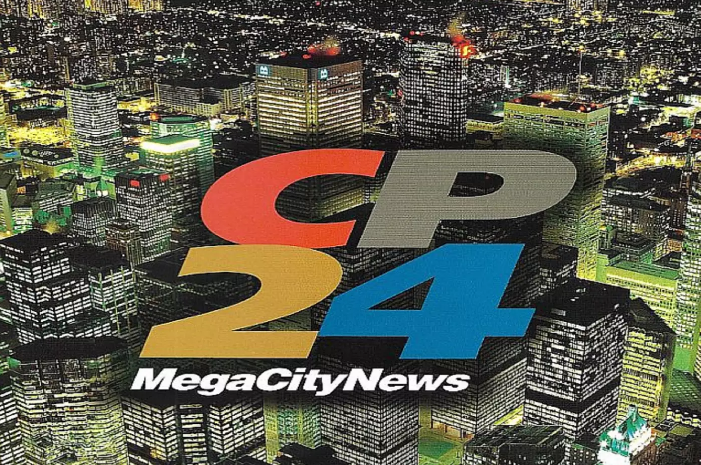 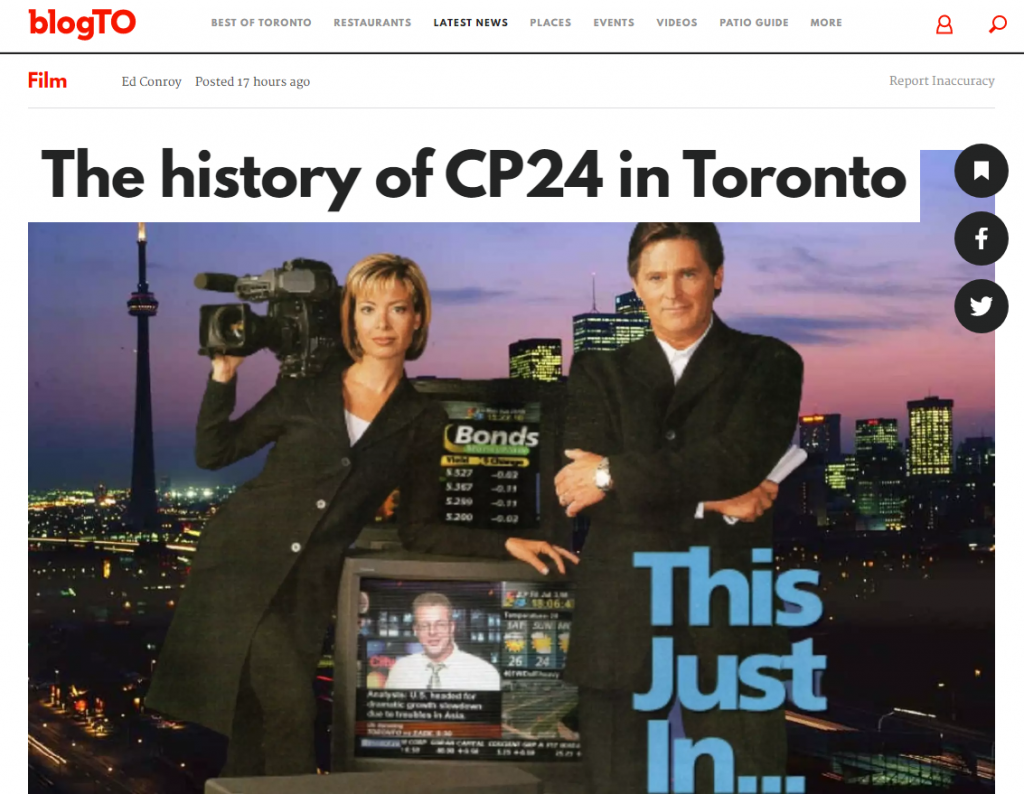 The history of CP24 in Toronto

CP24 is the most pervasive television channel in Toronto.

You’ll find it broadcasting in train stations, elevators, dentist and doctor’s offices, restaurants, bars, bathrooms and just about anywhere else.

It has been just over 24 years since CP24 came on the air, but do you know its history?

The wild-west of cable TV

Way back in 1997, the Canadian Radio-Television and Telecommunications Commission (aka the CRTC) loosened the criteria for creating new digital TV channels. Suddenly, all of Canada’s major networks went wild pitching new channel ideas.

This was at a time when cable provided only around 40 or so channels. The internet was great for “surfing” and sending email, but high-quality streaming video was still a distant dream. 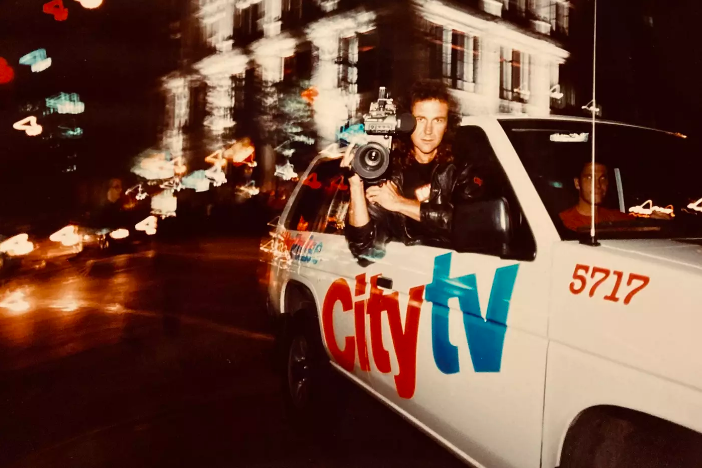 CHUM-City, the powerhouse network operating out of 299 Queen Street West and best known for housing Citytv, MuchMusic, and Bravo!, began brainstorming a flurry of channel concepts.

CHUM-City Executive Producer and media messiah Moses Znaimer had long envisioned a channel dedicated solely to local news (here he is talking about it on CBC’s The Way It Is in 1969).

The MegaCity was their newsroom. When Toronto amalgamated and rebranded itself “Megacity,” CP24 rejigged their tagline to “MegaCity News.” Image courtesy of Retrontario.

Using the revolutionary news gathering formula perfected in CityPulse, people on the street chic from Speakers Corner and MuchMusic, with access to radio stations 680 News and 1050 CHUM, plus print partners The Toronto Sun and The Financial Post, the pitch for CablePulse 24 was rock solid, but in no way a sure thing.

At the time, cable viewers already had access to CBC Newsworld, CNN, CNN Headline News, and CTV News 1. It was a long-held belief that local news could not sustain a 24-hour, seven-days-a-week broadcast cycle, or that anyone would even care.

When the licenses were awarded, not only had CHUM-City been awarded CablePulse 24, but a spate of other channels including Space: The Imagination Station (now known as CTV Sci-Fi).

With less than 100 days, the newsroom at 299 Queen Street West rallied and began to prepare for the launch of Toronto’s first dedicated news channel. 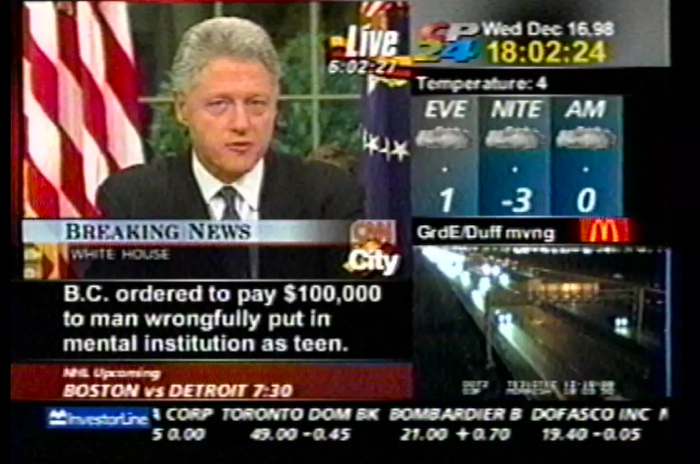 After 24 years on the air, the unique design of the CP24 screen might seem standard, but in 1998 it was perhaps the station’s greatest asset. Image courtesy of Retrontario.

CablePulse24 saturated its hyperkinetic screen with ever-changing pieces of essential local information, looking more like a computer screen than a traditional TV picture.

Attached to this was a digital clock; weather highlights; a three-day weather forecast; a smaller box showing live traffic from over two dozen locations in Toronto; a text box of news headlines; another of leading financial news; and a moving strip indicating the prices of major Canadian stocks or upcoming entertainment events in the city.

In the earliest days, there were even hidden jokes.

While other Canadian 24-hour news channels such as CBC’s Newsworld offered up a broad assessment of national news, and CTV News1 provided a loop of short newscasts, CablePulse24 was overflowing with Znaimer’s original CityPulse edict of illustrating “a day in the life of Toronto” from every possible angle. 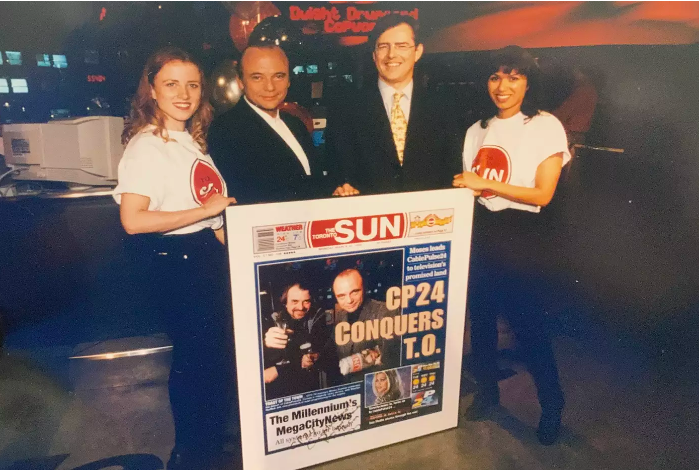 “CP24 is a fully articulated perpetual vertical news service which can drill down meaningfully to the local or even neighbourhood level while truly orienting its audience as a community of souls.” Znaimer told the Toronto Star upon the station’s debut on March 30, 1998. Image courtesy of the MZTV Museum.

The early days of CP24 featured a whirlwind of not just breaking news and headlines, but original shows. 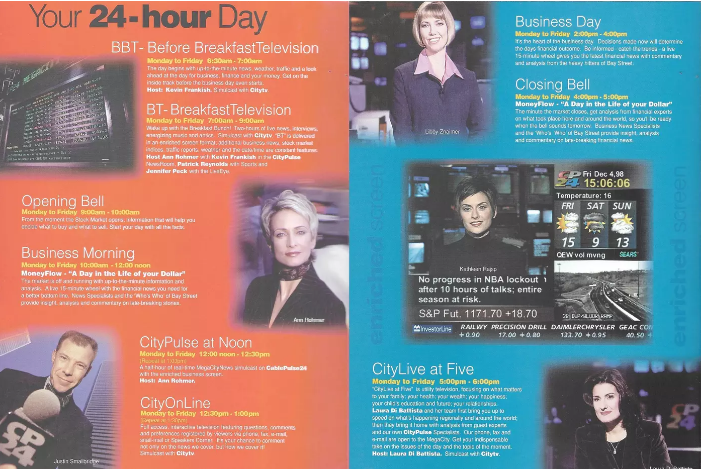 A look at the first CP24 broadcasting schedule. Image courtesy of Retrontario.

In addition to airing CityPulse at Six and CityPulse Tonight live and on repeat, CP24 ran original series such as The Q-Files, “a passionate look at gay and lesbian culture;” and the first local show of its kind, Last Call, a live-to-air call-in show which deliberated on issues of the day. TalkTV was an similarly interactive panel discussion.

More intriguing on the schedule were rarities such as Daily Planet, a block that aired news broadcasts from France, Germany, Italy, Japan, China and the Philippines in their original languages, and Rewind, a selection of vintage CityPulse episodes from the 1970s and 1980s (YouTube before its time!).

CP24 managed to attain a large viewing figure almost immediately and grew into the format, settling into a formula for most of the early 2000s.

In 2006, CHUM-City was sold to Bell Media. Due to Canada’s media ownership restrictions, Bell was forced to sell several of the CHUM City assets, including Citytv.

However, Bell maintained control of CP24, and so in 2007 CP24 lost almost all its on-air personalities and shows as it transitioned away from Citytv content towards CTV content.

After the split with Citytv, the station no longer referred to itself as “CablePulse24” but kept its CP24 title, making many people curious as to what the CP now stands for… 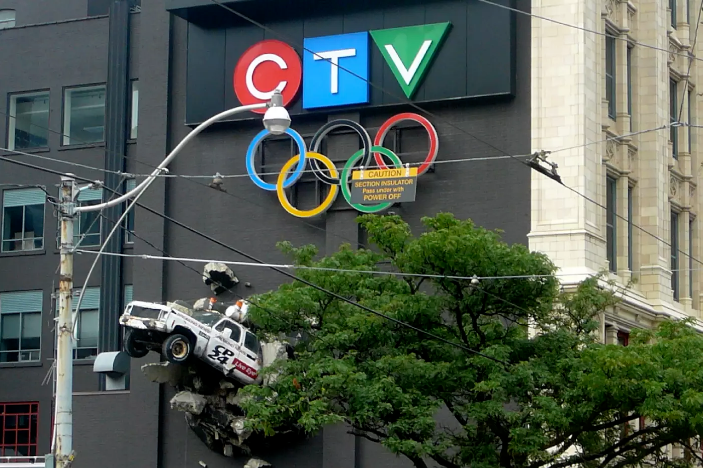 Changing of the guard: CTV sold off Citytv but kept CP24. Image courtesy of Steve Harris.

In recent years, many have jokingly referred to CP24 as “City Panic 24” owing to some of the breathlessly over-the-top promos and news alerts that the station employs to market the channel.

Perhaps the origin of this style can be traced back to CP24’s coverage of the G20 riots in Toronto. Up until then, even major international events (such as 9/11) had been covered without the kind of overbearing fanfare usually seen on US news networks such as CNN and FOX News.

An obviously quickly-put-together promo began airing on Saturday June 26, 2010 after an afternoon of violence, and soon became the typical kind of spots you saw on CP24 when breaking news happened.

CP24 remains the de-facto “cable pulse” of Toronto, even if they no longer go by that title. The fact that many people in Toronto still wrongly believe it to be a Citytv operation shows how powerful the original branding was back in 1998.

After 24 years on air, the CP24 computer screen interface might seem old hat now, but it truly was a paradigm-shifting moment in the history of local Television and “MegaCity” news.