Mississauga realtor Jiangou (Tony) Han, in an image from his profile on the Homelife/Landmark Realty website. He was reported missing since last Thursday. (Homelife Realty)

The disappearance of two men — a high-profile real estate agent dealing in luxury homes and his client — is causing concern among the Greater Toronto Area’s Chinese community.

The two men were together last Wednesday at Fei’s 15-room, $2.4-million mansion in Mississauga, which Han had listed for sale.

Neighbours say Fei and his family lived in the house at 1801 Featherston Drive for about five years before it went on the market last fall.

Police have a surveillance video that shows Han parking his Mercedes Wednesday at a Tim Hortons in the Don Mills area of north Toronto. In the video, Han is seen parking his car before being picked up by someone in another car and driving off.

Peel Police have not released the video and Const. Adam Minnion won’t say much about the investigation.

He does say there are “… some areas of concern” for investigators. “Until we classify this as a crime scene or crime case, I have to be guarded about what I can say about the car,” Minnion said.

Han’s family declined to speak with CBC News about the case on Tuesday.

Lu Zhou, a producer with CBC Radio in Toronto, has been following the case and on Tuesday told Metro Morning host Matt Galloway the case has received considerable attention in the city’s Chinese media.

“He’s a famous, brand-name realtor,” Zhou said of Han, calling him “pretty much a Chinese Brad Lamb.” Lamb is a well-known real estate agent specializing in downtown Toronto’s condo market. He makes regular appearances in real estate television shows and his face is a common sight on downtown billboards. 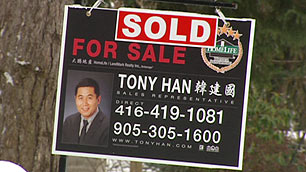 As a real estate agent specializing in high-end properties, Jiangou (Tony) Han is well-known in the Toronto Chinese community. (CBC)

Zhou said Han has made his name dealing in high-end properties, particularly representing clients in the Mandarin-language community.

“Han is one of only a few who’s succeeded at tapping that market,” Zhou reported. “His ads are seen in 80 per cent or more of Chinese media outlets.”

Zhou said Han immigrated to Toronto from mainland China in 2004. He was a recent speaker at a real estate seminar, where he was praised as a role model in the business community.

Zhou said reporters who’ve dealt with Han describe him as an affable man, with a strong ego and a keen understanding of the value of publicity.

Zhou said there have been no reports of Han’s involvement in anything underhanded or illegal. He has never been in the news before his disappearance, other than in complementary feature articles.

Much less is known about Fei, Zhou reported.

According to real estate records, he owns the Mississauga house Han was trying to sell. He used to own it personally, but sold it to his own numbered company a few years ago for $1.

Zhou said Meng Meng last spoke with Han on Thursday, the day he was reported missing.

“She called his cellphone to confirm information in an article, but he hung up in an uncharacteristic way,” Zhou reported. “When she called back a few minutes later, the cellphone was turned off. She was immediately concerned.”

Zhou said some real estate agents are speculating this is a kidnapping case, something that police won’t confirm.

Details are emerging about two local businessmen who went missing from a Mississauga mansion last Thursday.

One of the men, 44-year-old Jiangou “Tony” Han, was a realtor – an immigrant from China who worked his way up from cutting grass to selling multimillion-dollar homes and winning awards as a real estate agent.

The other was Han’s client, 40-year-old Jun “Johnny” Fei, who had listed his property at 1801 Featherston Dr. for $2.4 million. That’s where they were last Thursday when they both disappeared.

That afternoon, a family member called police, who had their forensics unit search the property.

“We’ve mentioned this before that there were some things within that home that were a concern to us,” Const. Adam Minnion said on Tuesday. “However we’re at a bit of a stalemate in this particular investigation.”

A security camera had captured him on Wednesday afternoon parking, going into the store, coming out with something he bought, and getting into the passenger seat of another dark sedan, which then drove off.

Meng Meng, a reporter with Chinese magazine Weekly Fame, wrote a feature on Han and spoke with him days before he vanished.

“I was so surprised because he’s really a nice guy, very [gentlemanly],” she said.

“I don’t think he’s a person to have some conflict with someone else.”