Real estate, retailers and the job market have been hit hard, but there are some reasons for hope

Every facet of Canadian life has been changed by the current pandemic, from how and where we live, to how we shop, eat and work. While not all changes have been for the better, COVID-19 could bring about some positive changes to Canada’s economy.

The pandemic has certainly wreaked havoc on one of the traditional pillars of Canada’s economy — the housing market.

Physical distancing requirements at the onset of the pandemic in March walloped the real estate industry because realtors couldn’t host open houses, and buyers were concerned about the future. This year was the worst April for home sales in almost 40 years, and May was only slightly better.

Realtors are quick to say the slowdown is just a blip, and that demand remains strong. But policy-makers are clearly a little bit concerned. The Bank of Canada is expecting COVID-19 will cause mortgage deliquencies to more than double the peak they hit during the financial crisis of 2009, and Canada’s national housing agency is expecting prices could drop by almost 20 per cent before rebounding starting in 2022, or later.

Lower prices are bad news for sellers, but a slowdown does represent an opportunity for buyers looking to jump to a market that had gotten away from them.

COVID-19 has prompted lenders to cut mortgage rates to record lows, a welcome development for buyers. And those lower rates are helping current homeowners, too. 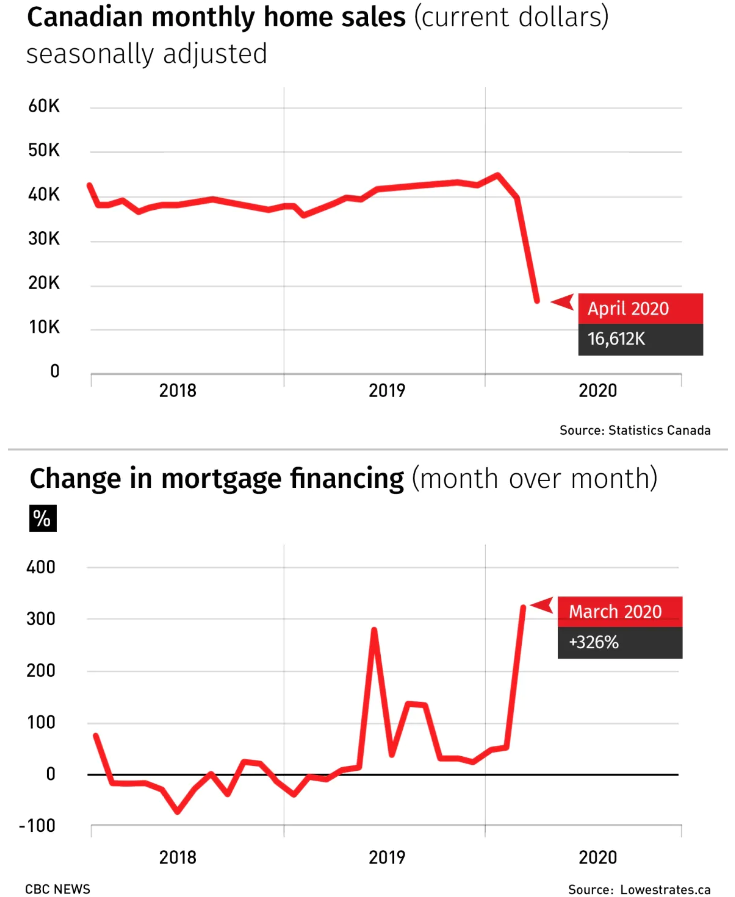 Home sales are plunging, but new buyers are being offered the lowest interest rates on record. Existing owners are refinancing, too. (Joan Dymianiw/CBC)

“We have seen a huge increase in the number of consumers coming to our site to compare rates and see if they can save money by breaking their current mortgage and renewing early or refinancing,” said CEO Justin Thouin.

The pandemic is also affecting commercial real estate. It may have started a small shift away from the standard downtown office towers, as many question how much they want to live and work in dense urban areas if they don’t have to.

Public transit use plummeted during the pandemic, and has yet to recover even as the economy has started to reopen. 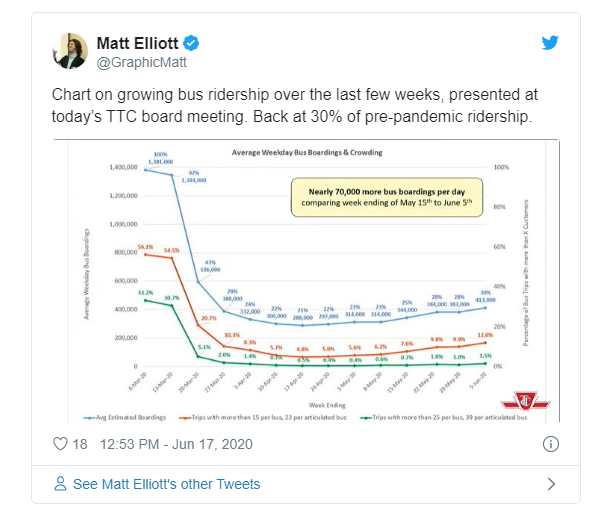 Toronto’s cash-strapped transit system has missed out on almost $100 million worth of fares, city officials said recently, without a corresponding decline in the costs of running the system.

Bike sales are booming and bike lanes are experiencing a renaissance. But as a partial recovery of oil prices may suggest, even the much-maligned car could see higher demand as consumers opt for the safety and security of their own self-contained travel bubbles.

“This makes perfect sense as no one wants to be in a crowded space currently for themselves or others,” said Mark Le Dain, head of business intelligence and strategy at Validere, a data intelligence firm that advises companies in the energy sector.

Retail is another sector of Canada’s economy that has taken the pandemic on the chin. New numbers released last Friday showed retail sales fell by more than a quarter in April, their biggest plunge on record.

While some stores are doing well (business at grocery stores is booming, for example), stores that sell discretionary items are being hit hard for the most part as consumers focus on what they need to get by.

Widespread store closures hit just about every chain, and it looks like many may not recover. Retail stalwarts such as Reitmans and Aldo have sought protection from their creditors in recent weeks, as the pandemic exacerbated the problems they were dealing with already.

Online shopping, on the other hand, is proving to be one of the pandemic’s biggest successes. Online sales more than doubled in April and now make up almost 10 per cent of everything sold in Canada — the biggest proportion on record.

The Canadian chains that ran into trouble were lacking on the e-commerce side, but retail experts say the crisis prompted businesses to dive into the world of retail online.

“Retailers and suppliers have been forced to build out online shopping capabilities at an accelerated rate,” said retail consultant Bruce Winder, author of new book Retail Before, During & After COVID-19. “Consumers now have the convenience of being able to buy almost anything online and have it delivered or use curbside pickup.” 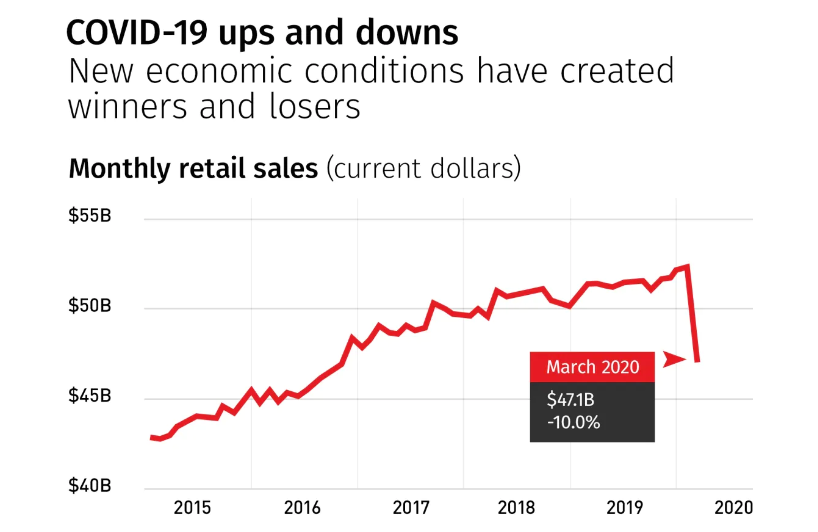 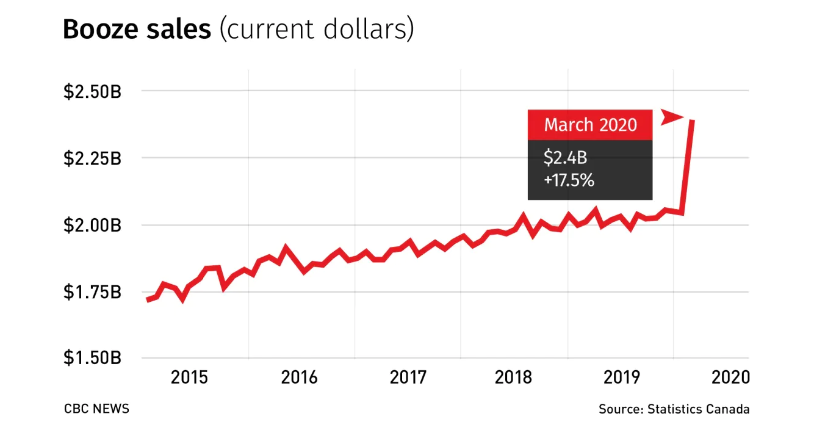 While overall sales are down, some sectors such as grocery stores and alcohol stores are booming. (Joan Dymianiw/CBC)

There’s perhaps no better example of the boom in online selling than the rise of Shopify, the Ottawa-based company that helps real-world stores sell online. Shopify was valued at barely over $1 billion when it went public five years ago. Last month, it passed the Royal Bank of Canada to become the most valuable company in Canada — worth more than $140 billion at last count.

Shopify is a great example of the type of company that could be set to thrive in the post-COVID economy: nimble, innovative and digitally focused.

Tech companies like Shopify represent a small but growing part of Canada’s economy. The tech sector has grown twice as fast as the rest of the economy in the last decade, and now makes up five per cent of Canada’s entire GDP, according to the Bank of Montreal. 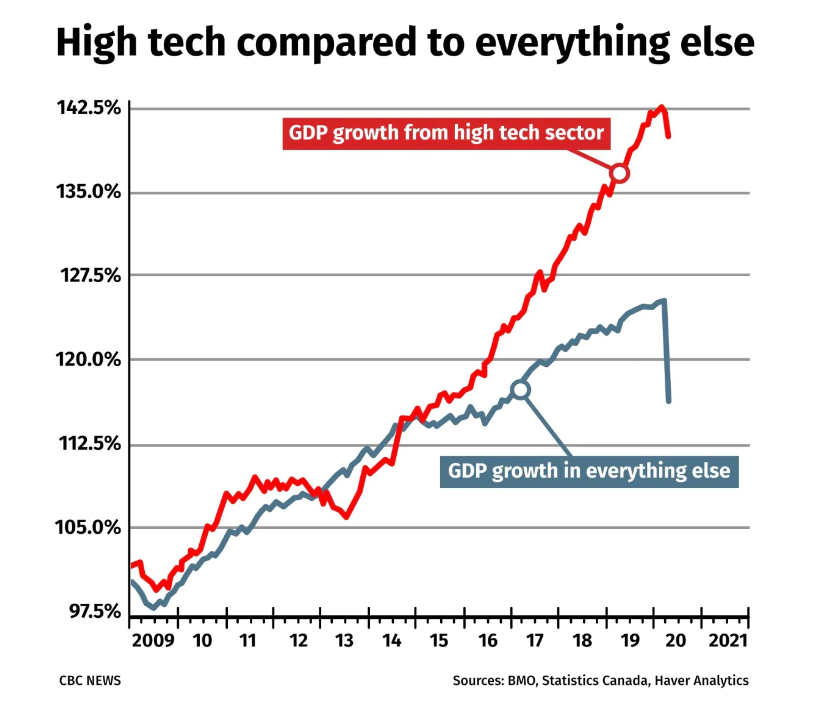 Canada’s technology sector is now about five per cent of the entire economy, growing much faster than any other part. And while IT has been hit by COVID-19, the impact hasn’t been as dramatic, either. (Scott Galley/CBC)
Even tech hasn’t been immune to the slowdown of COVID-19, but the sector hasn’t plunged by nearly as much as others. The resilience of Canada’s technology sector is an encouraging sign as Canada’s economy tries to reorient itself for the post-pandemic reality.

The sea change of COVID-19 has impacted Shopify itself, as the company recently announced it will now allow its employees to work from home permanently, should they desire. The company has a stylish headquarters in downtown Ottawa.

Such a move would have been considered unthinkable not too long ago, but the pandemic has hurried along changes in the way Canadians work.

One positive trend emerging from COVID-19 is it has turned flexible work from something that companies used to pretend to care about, into a must-have for any firm hoping to thrive long term, said Jennifer Hargreaves, entrepreneur and founder of recruitment agency tellent.

The shift was underway before COVID-19, but has certainly accelerated during the pandemic, she said.

“This is very much about collaboration and making work work better for everybody,” Hargreaves said.

Instead of trying to fix a broken system, companies hiring top talent today are taking flexibility seriously. “That’s where you’re going to see companies thrive,” she said. “That old way of thinking about the economy is not going to be sustainable.”